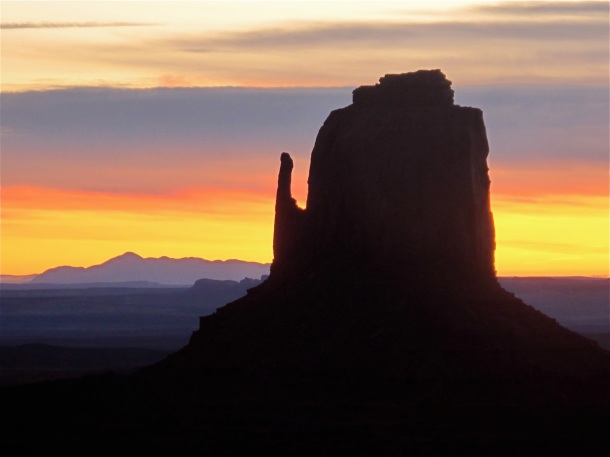 Few places move the spirit or stir the soul as do northern Arizona’s Navajo lands. I keep returning to this mesmerizing landscape of red sandstone, deep canyons, intriguing land formations, and grassy mesas, and each time I visit, I’m awed by the beauty and humbled by the simplicity. It’s a place that exposes that the history taught in grade school is riddled with holes, that classic westerns are filled with inaccuracies, that truth is as multi-layered and shadowed as a slot canyon.

While summer may be a more comfortable time to visit, from November into April, the experience is more personal and less rushed, almost sacred. I know that here, amidst the red rock canyons and high desert plateaus, if I’m patient, and open my senses, all my questions will be answered.

By any definition, the 27,000-square-mile Navajo Nation is a spectacular chunk of real estate. It’s roughly framed by Route 89 and 40 and spills into Utah and New Mexico. Within or edging its Arizona borders are seven National Monuments, two National Parks, one National Historic Site, one National Recreation Area, three Tribal Parks, countless natural sights, and the Hopi Reservation, an independent island floating within the Navajo Nation sea.

“Spiritually, the Navajo reservation is bordered by four mountains,” says Leonard Nez, a Navajo guide. With just a few words, he conveys the Navajo way, how spirituality trumps capitalism and community rises above individualism. “We never fought over these holy lands, they’re not ours. We’re just the caretakers.”

It’s one thing to tour these sprawling lands, another to appreciate them. The latter requires understanding the culture, heritage, and history, and recognizing that the relationship between life and land here is as tightly woven as a Navajo rug.

“Our culture is like Buddhism,” says Donovan Hanley, of the Navajo Interactive Museum in Tuba City. “Everything has a life, a purpose.” Museum exhibits explain everything from the creation story to contemporary life, and explore a culture as colorful as the Painted Desert’s sands. Like other young Navajos I’ve met in my journeys, Hanley struggles to balance modern aspirations with reverence for traditional ways, to embrace the future while honoring his past.

In Page, on the shores of Lake Powell, Mylo Begay works for his uncle Chief Tsosie’s Antelope Slot Canyon Tours. Begay’s passion and gift for photography enrich his tours of this twisted groove, 320 feet long and 220 feet deep, carved by wind, sand, and water surging at up to 52 miles per hour. Light penetrates and dances magically off the curves and striations. Begay helps me create images that would do National Geographic proud by adjusting technical settings and advising on angles.

Then, when the other groups have passed through, he trades modern ways for traditional ones. He demonstrates the intimate canyon’s sound effects by playing a traditional flute first in an open area, then by curling up Kokepelli style in a shallow cavern. The music from the first is beautiful, but the second melody is more haunting and brings shivers.

Trading posts are plentiful in communities, like Page, that edge Navajo lands. And in these, traditional Navajo belief in community-owned property butt against American capitalism. When I visited the Blair Trading Post, Elijah Blair was still holding forth in the upstairs museum, which displays family treasures rich in blankets, jewelry and pots garnered over the decades.

“Since the Navajo don’t own property, they had no collateral, and when they needed money, there was no other way for them to get it than to pawn or trade something,” Blair explains. “We bought everything they produced and found a market for it: livestock, wool, pinon nuts, potatoes, corn.” In more recent years, the emphasis has shifted from trade to pawn.

One of the plusses of traveling in the off season is the ease of striking up a conversation with someone like Blair. It’s in informal exchanges with store clerks, gallery workers, waitresses, even folks at neighboring tables that I pick useful tidbits, from the traditional Navajo greeting, Yá’á’t’ééh, to learning that the Navajo call themselves the Diné, the people.

It’s also how I learn about Shonto, which means sunshine springs. It’s an appropriate name for an oasis of cottonwoods drawing life from a creek. It’s also home to the Shonto Trading Post, a combination general store, grill, and gallery selling traded goods: woven blankets, silver and beaded jewelry, baskets, and folk and utilitarian pottery.

“All the crafts are locally made,” trader Al Grieve explained. “This is one of the few areas where people still card and spin their own wools, and one of the few that also produces pottery and baskets.” The selection isn’t huge, but I part with more than a few dollars on a woven mat and piece of folk art that makes me smile.

Grieve says that Shonto held on to traditional ways longer than many other Navajos because they hid out in the canyon from Kit Carson, avoiding the Long Walk. That’s the death march in 1863, when the Navajo were forced to leave their lands and walk to Fort Sumner.

I hear similar stories from my guide in Canyon de Chelly National Monument, a 130-square-mile labyrinth comprising two major canyons, gorges, and offshoots. Anyone can drive along the rim, but accessing its red rock depths and the fertile valley floor below, requires a native guide armed with a truck that can navigate the deep ruts and sand waves.

It’s a rough ride, and a cold one. Although flaps provide some shelter from the elements, it’s an open-style vehicle and I’m thankful for my gloves, hat, scarves, and layered winter-weight garb. The rewards far outweigh the discomfort, though. People have lived here since 350 A.D., and more than 2,700 archeological sites, including cliff dwellings and petroglyphs, remain. As always, I’m slack-jawed pondering how these ancient peoples etched such intricate villages high on narrow canyon shelves; how they built shelters that took advantage of the sun and canyon walls for summer cooling and winter warmth; how they farmed the canyon floor, and scaled the cliffs carrying water and food.

Despite its size, Canyon de Chelly is an intimate experience. Not so Monument Valley, roughly three hours northwest. Perhaps no place on the Navajo reservation is more recognizable than Monument Valley, thanks in great part to John Wayne’s westerns. Throughout the valley, sandstone formations rise out of the high desert floor, but the most striking ones are within the tribal park. Previously, we’ve looped through the park valley on our own, but it’s in the company of Navajo guide Harold Simpson (right), whose family is one of about 14 living within its boundaries, that I learn not only to appreciate the landscape but also life here.

“This used to be my sandbox,” he says, as we stop near the Praying Hands formation. “My parents were very traditional, they hardly knew English; my stepfather is a medicine man.” Simpson’s grandparents taught him traditional ways. “For elderly Navajo, Monument Valley is so sacred they call it the Talking Rocks,” he says. The land is littered with pottery shards, but to bring one home, he says, is to bring home a spirit or ghost. “You don’t want no bad mojo.”

His tour detours off the public roads and also includes stops for singing, flute playing, drumming, and a real treat, traditional dancing by his brother Richard (below right). Our van load gets better acquainted as Richard teaches us a few steps while Harold sings and drums.

We stop again at the Sun’s Eye, a magnificent cavern formation with a hole in its roof. Simpson again drums, this time belting out a song he wrote about the Navajo Code Talkers, who communicated Allied secrets during World War II. His voice reverberates off the walls of the cavernous formation. And here’s a little-known tidbit, there’s an exhibit dedicated to these heroes at the Burger King in nearby Kayenta.

The sun is setting as we arrive back at the Visitor Center. When pushed, Simpson talks a bit about attached The View Hotel, which opened in the park a few years ago and delivers on its name. Economic development is a very sensitive topic, he says. It illustrates the clash between the elders, who see the land as sacred; the younger generation, who want more opportunities and have grown up with TVs, computers, and cell phones; and those, like Simpson, who try to balance between two worlds, a moccasin-clad foot in one, a Reebok-clad one in the other.

“For me, for my business, I believe economic development is very important. My guides have families to feed,” Simpson says. But he acknowledges that commercialism and capitalism rub against the bedrock of his traditional Navajo ways. “We wrestle with that,” he says.

From my hotel room, I peer over the valley floor, watching The Mittens formations fade into darkness. A procession of vehicle headlights straggles back toward warmth, comfort, and lights. One lone set of lights bumps along in the other direction. I know it’s Simpson returning to his traditional hogan on the valley floor.

Note: the Navajo Nation is dry. Be sure to sample traditional Navajo fare, including frybread (drizzle it with honey), stews, tacos, and chili.

The Cameron Trading Post, about 10 miles south of Tuba City, is a combination motel, trading post, gallery, and restaurant.  Navajo weavers often can be seen working in the trading post. Many Navajo praise the tacos served here. It’s also convenient to exploring the Grand Canyon.

Thunderbird Lodge is the only motel in Canyon de Chelly. It has a cafeteria-style restaurant and trading post on site. It’s a sister property of The View Hotel in Monument Valley.

The VIEW Hotel is the only accommodation within the Monmument Valley tribal park. It’s adjacent to the visitor’s center, with trading post, theater, and full-service restaurant.

Gouldings Lodge has a motel, cottages, restaurant, trading post, and a museum with a strong John Wayne collection.